After performing for a massive audience of over 5000 people last year, Trustfort Events brings back ‘Virsaa with Sanam Again’. Pune is soon to witness the magic of India’s ‘Fabulous Four’, the band SANAM on public demand. In its second season, Virsaa  is presented by Vinay Aranha as a step to further its position as a leading music festival for the urban youth in the country. 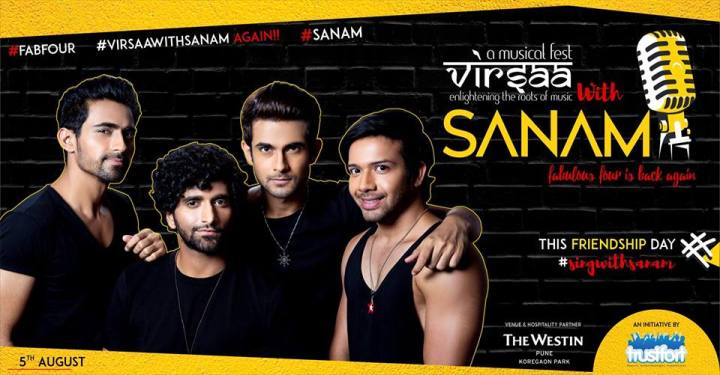 To promote this concert, Trustfort Events organized a press conference on August 4th, at The Aranhas’ Rosary school, camp. During the conference, the 4-member band, Sanam Puri, Samar Puri, Venky S and Keshav Dhanraj spoke about the distinguished sound and style of the band, blending four different musical influences. SANAM is recognised to revive the dying independent music scene and band culture in India.

Being India’s most popular music artist digitally with maximum YouTube subscriptions crossing 2.4 million subscribers and growing steadily. The band so far has recorded and performed songs majorly in Hindi and English as well as in other languages like Spanish, Bengali and Gujarati. Talking about their YouTube success they said, “Our strong passion and commitment for music was the driving force behind our success on YouTube. We were never in it for the fame. The fame was a pleasant side effect.” 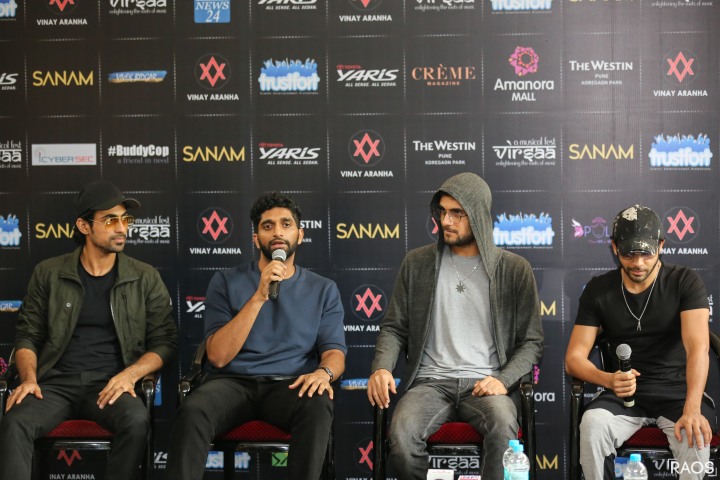 Being known for reviving retro classics, the band owes it to the special connection with these songs having grown up listening to them.“The lyrics of classic songs are so meaningful and have the power to touch your heart. We wanted to revive these and bridge the gap between these songs and today’s generation,” said Sanam Puri, the lead vocalist. Retro classics like ‘Lag Jaa Gale’, ‘Aap Ki Nazron Ne Samjha’, ‘Mere Mehboob Qayamat Hogi’ and ‘Gulabi Aankhen’, are a few songs that SANAM has presented with the soulful lyrics and melodies of the olden days hits in the band’s contemporary style.

Speaking on the conference, Mr. Rohan Singh, Managing Director, Trustfort Events said, “Sanam has been a band we’ve been very happy to associate with. They are the voice of the youth and their style of music is also something the youth appreciate a lot. It has always been our aim to bring entertainment and fun to the people which they relate to. Virsaa is a festival that is very close to our heart. We plan to bring more events to the audience of Pune that has always reciprocated the love. We are very excited for this event and look eagerly forward to host both the band and the music lovers”.

“SANAM believes in creating a change in the society through their music.  Virsaa, in its endeavour to introduce the roots of music to today’s generation, is an initiative I stand by as well. Music is another way to bring the youth together and share a common love for music. Music can teach and force emotions which today’s generation is in big need of” said Mr. Vinay Aranha on his support for the concert.

In its second season, Virsaa is back yet again with a fresh musical theme, to introduce the power of music to a more diverse audience. Presented by Vinay Aranha, the concert will be held on Sunday 05th August, 06.30 pm onwards at The Westin, Pune.